Today’s article is rather informative, as it contains five of the most significant, fundamental architectural elements that are used always and everywhere in construction, interior design and interior decoration..

It will be about «five pillars of architecture» – elements, without which we can no longer imagine the decoration of residential and public premises, but you need to know more about them, especially when you intend to start building your own house.

Columns are vertical supporting structures consisting of a base, a trunk and a capital.

In ancient Greece, the columns carried the entablature and supported the roof with it. The Romans, unlike the Greeks, used columns for decorative purposes, and preferred an arched system with columns.

Columns can be paired, like Roman, bundles of columns, like Norman, free-standing, like Indian ones. The trunk, in turn, can be simple, or richly decorated (by the way, in modern interiors they use, rather, the first option, more universal and democratic).

If you want to use columns in the structure of the house that you are building, you should know about the main order systems that have certain characteristics, according to which the columns are attributed to a particular order..

The Doric order, outwardly the simplest, but the most ancient, developed in Greece. The Doric Column consists of a low base, a monumental trunk, and a laconic capital. Ideal for modern minimalist rooms, living rooms and halls in classic and Mediterranean style. 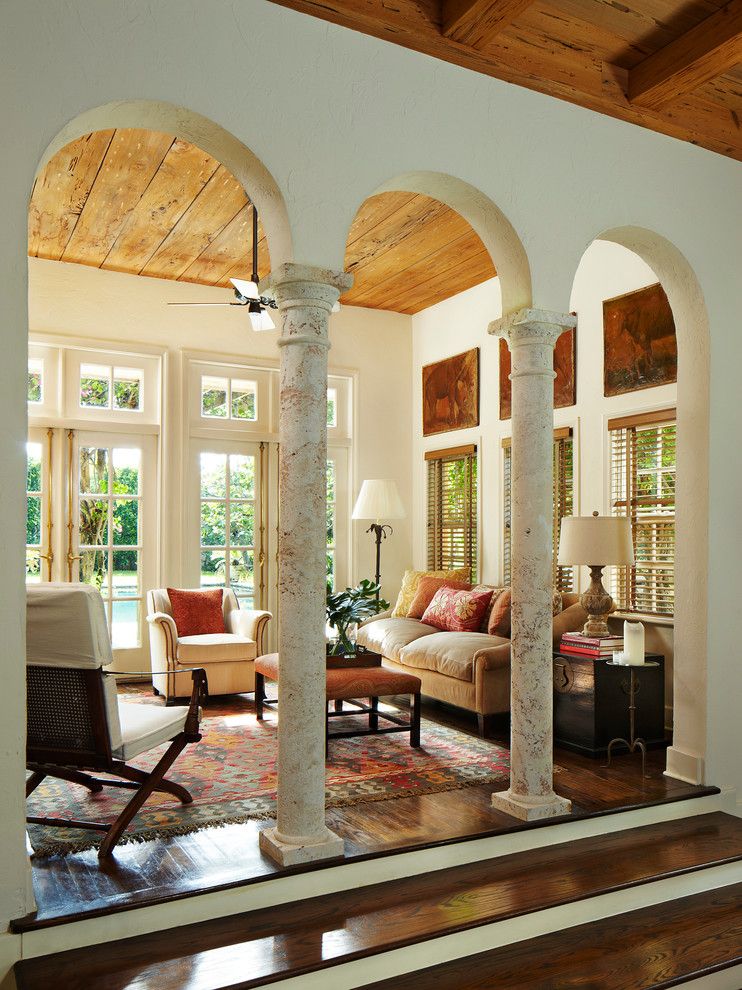 The Ionian order developed almost simultaneously with the Doric order, but acquired its final form only by the middle of the 5th century. BC The appearance of the Ionic column is more graceful: lightness of proportions, refinement of more dissected forms, abundant use of decor.

The characteristic features of the Ionic column are its obligatory installation on the base, as well as a capital with a pillow topped with two volutes (curls).

For eclectic interiors, installing Ionic columns will be a direct hit as they can coexist with different shapes and colors of furnishings. 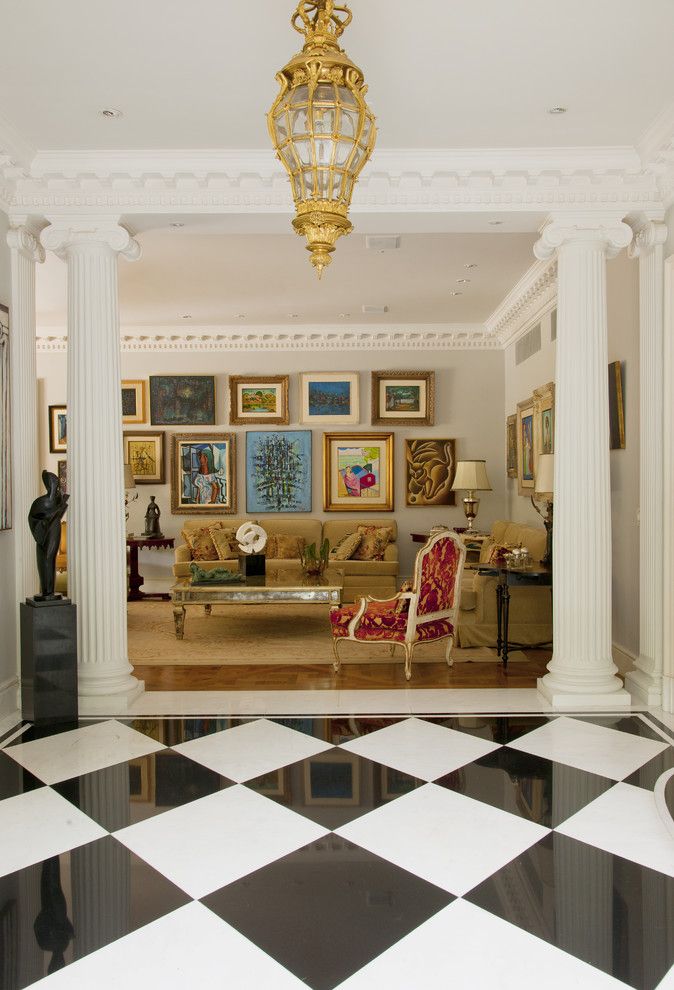 The Corinthian order is the most diverse and richly decorated, such columns are suitable for pretentiously decorated rooms, always with high vaults and luxurious furniture in historical styles.

The Corinthian order is most easily recognized by the column capitals, since the rest of its parts are borrowed from the Ionic. The top of the column, the capital, resembles a basket entwined with acanthus leaves (plants from the Mediterranean coast), curled in a spiral. 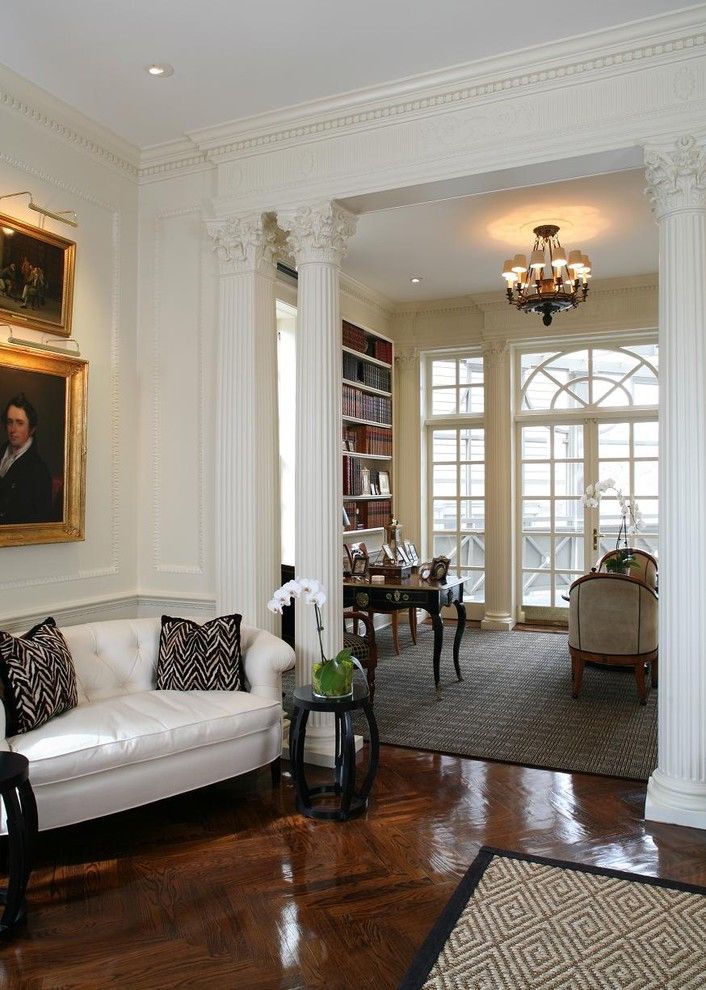 An arch is a structure that covers an opening in a wall or the space between two supports. Usually the top of the arch is rounded, but its shape varies from semicircular to pointed. Arches are often used as a support in the walls and foundations of houses..

Semicircular arches in the interior

They are also called French, and this type of arches are distinguished by a rounded top, ornament, and columns, as if carrying a load, but in fact playing the role of a decorative element.

Semicircular arches are one of the most versatile design options for door and window openings for rooms in a classic style, eclecticism and even a grunge interior. 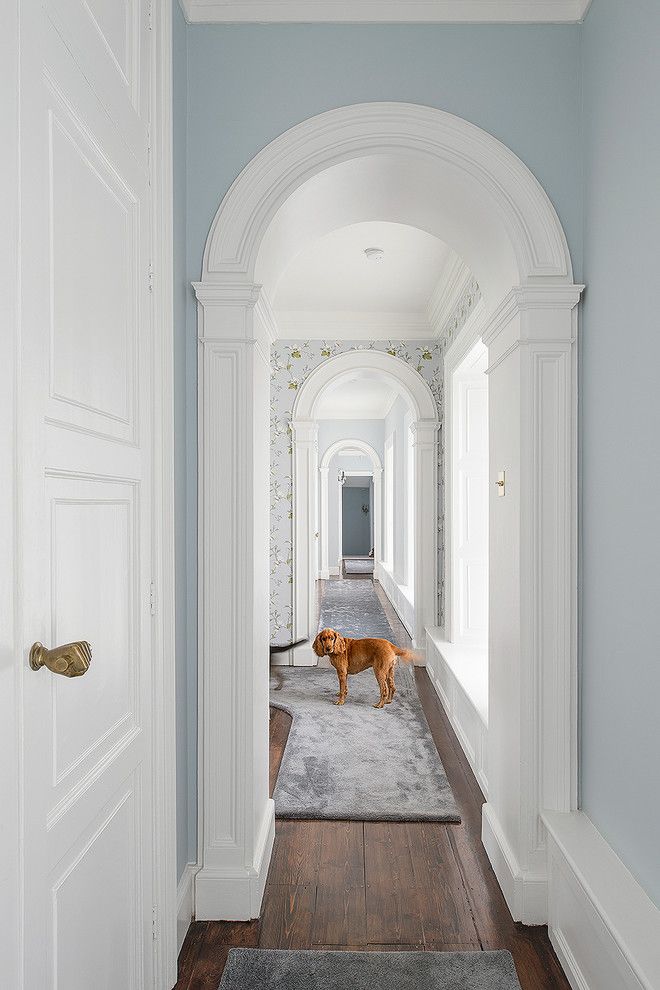 Lancet and horseshoe-shaped ARCHES IN THE INTERIOR 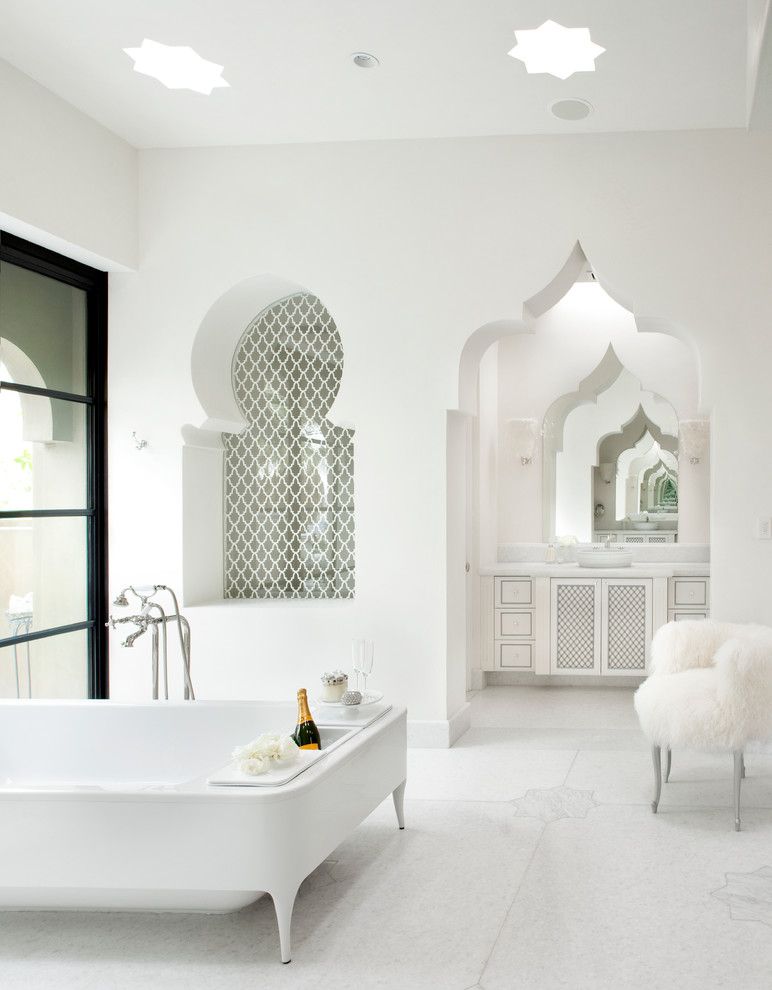 Renaissance ARCHES IN THE INTERIOR

Another, very beautiful and sophisticated type of arches, which follows the Roman pattern of semicircular structures with a castle stone, frieze and cornice, located within the framework of the classical order.

In modern interiors, you can see a variation of the Renaissance arch, somewhat widened and squat, with the help of which the opening between two adjacent rooms, for example, the living room and dining room, kitchen and corridor, can be accentuated. 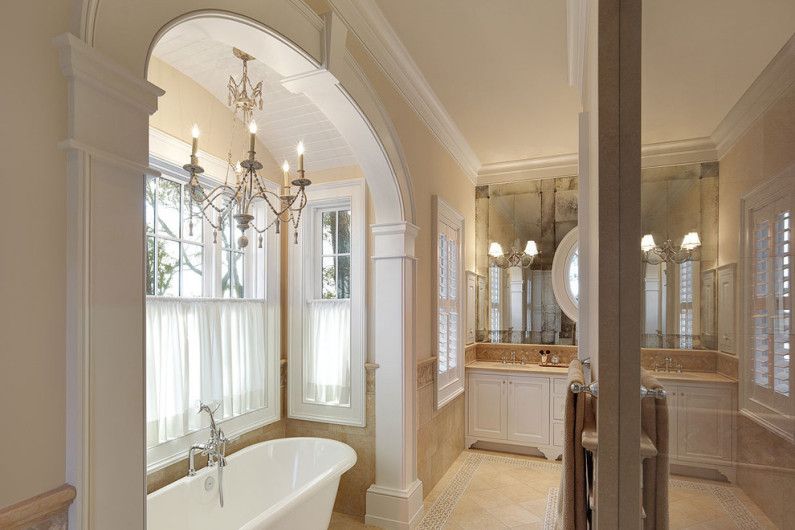 Only in the 1840s. began to produce sheet glass, thin and wide enough, allowing you to admire the views, not broken into parts by the window sash.

The earliest windows were unglazed holes in the walls through which light and fresh air entered the room. And the first glass panes, which played both functional and decorative roles, appeared in Rome around 65, but glazing became widespread in church architecture in the 13th century, and in residential buildings in the 16th century..

The emerging variety of styles testifies to the importance of windows in architectural aesthetics, and the design of glazed windows at all times depended on the development of the glass manufacturing process.

Pointed windows in the interior

The pointed pointed arch first appeared in Islamic architecture. This form is also found in Gothic architecture, where windows, moreover, were supplemented with colored glass and openwork stone carvings. It is noteworthy that later the Gothic windows were revived deliberately «antique» form at the end of the 18th century, and was widely used by Victorian architects.

Currently, in the construction of houses, various variations of lancet windows can be used, which give the room a mysterious oriental character.. 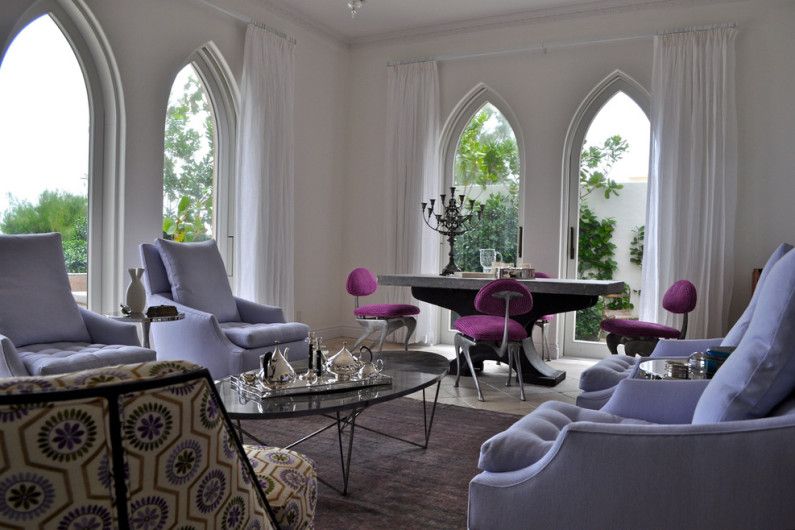 Round WINDOWS IN THE INTERIOR

The rose window is a skillful architectural element that imitates flower petals or wheel spokes in the design of windows, which were very popular in the architecture of buildings in the Romanesque style..

Now round windows are the same effective decoration of the house, both outside and inside, but are a simplified version «roses»: with or without thin frames.

Round windows are also called «light», and are used in high rooms of country houses in the upper part of the wall to better illuminate the interior space. 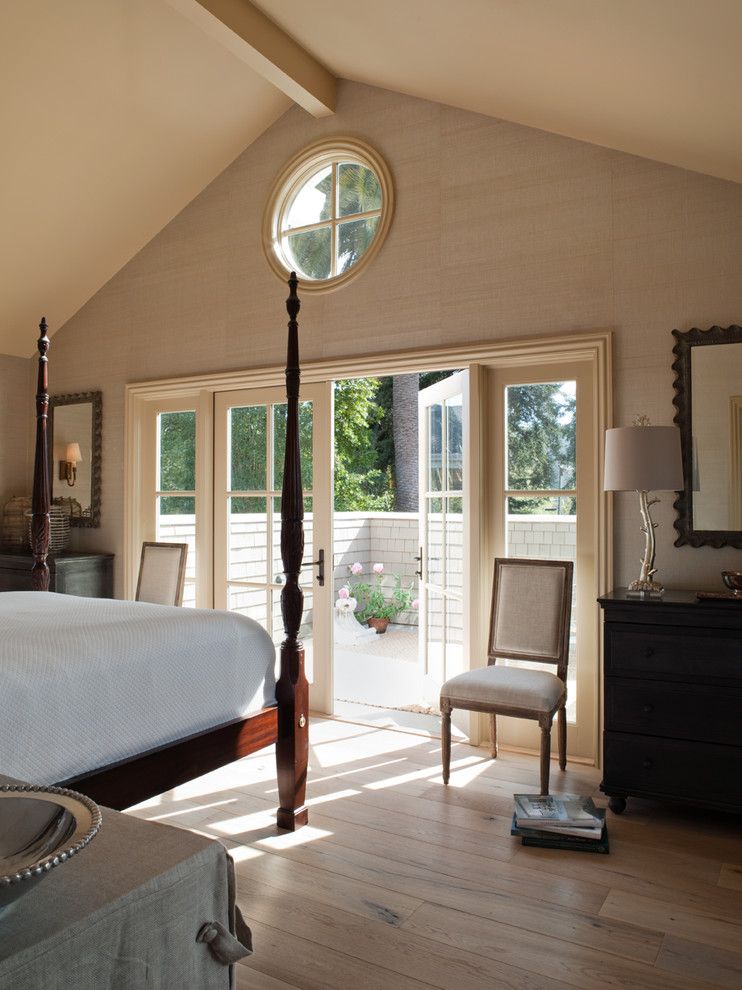 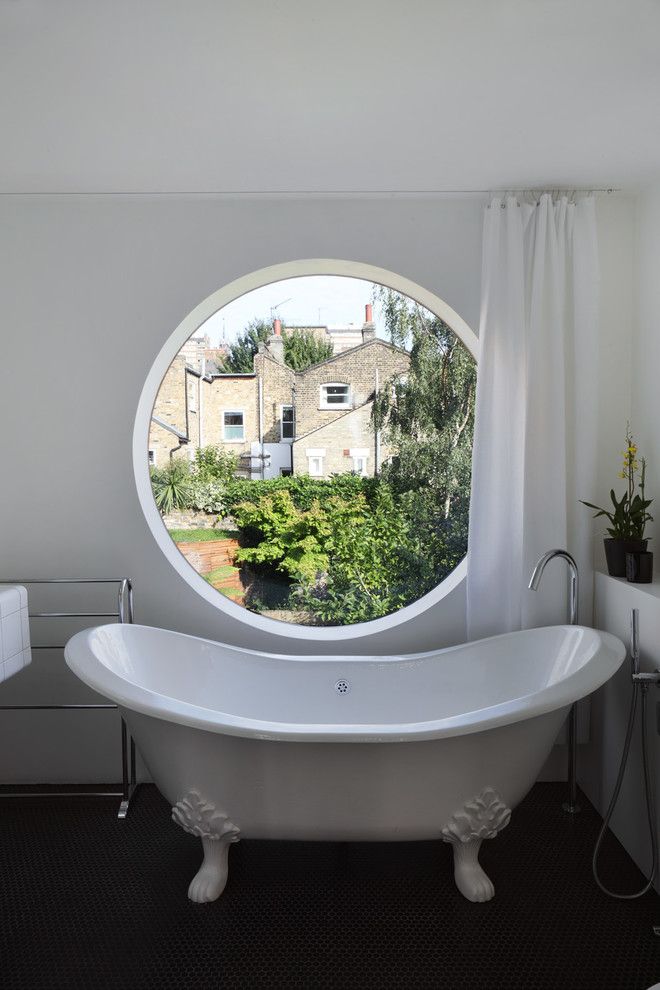 Bay windows and alcove windows protrude from the wall of the building. Often interestingly decorated, they let in more light than just windows.

Alcove windows have always been located on the upper floors, but square and corner bay windows can be located on any floor.

In the interior, a bay window can serve as an area for creativity, work at a desk, or be used to place a dining group in a kitchen, dining room or living room. 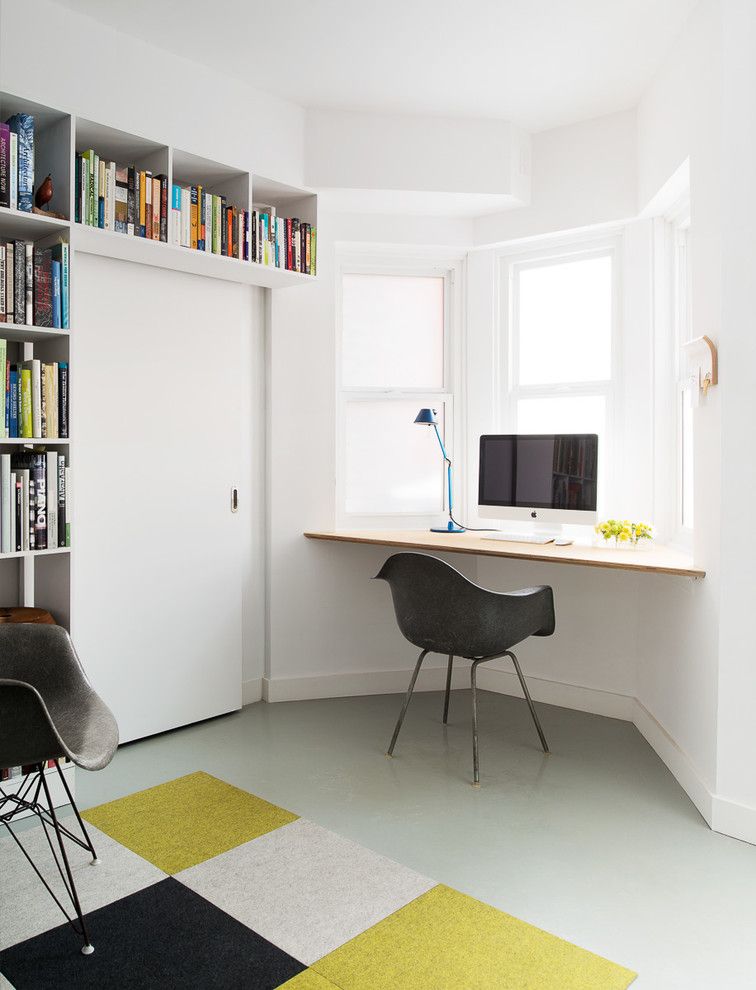 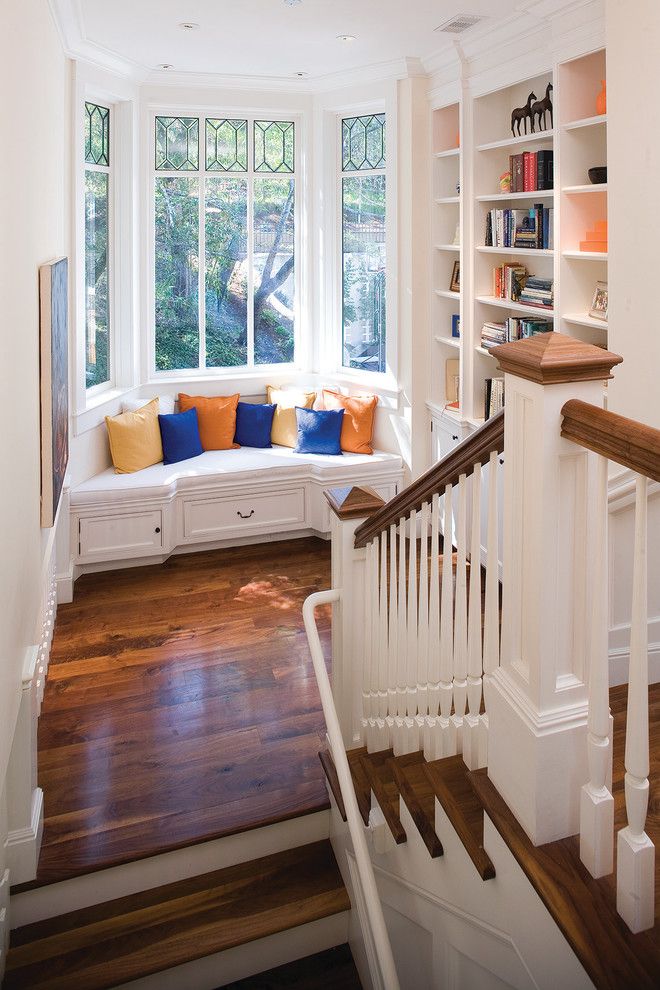 In apartments, French windows can simultaneously be an exit to a balcony or terrace, and located in the lower floors of a private house – to exit to a garden or a greenhouse. 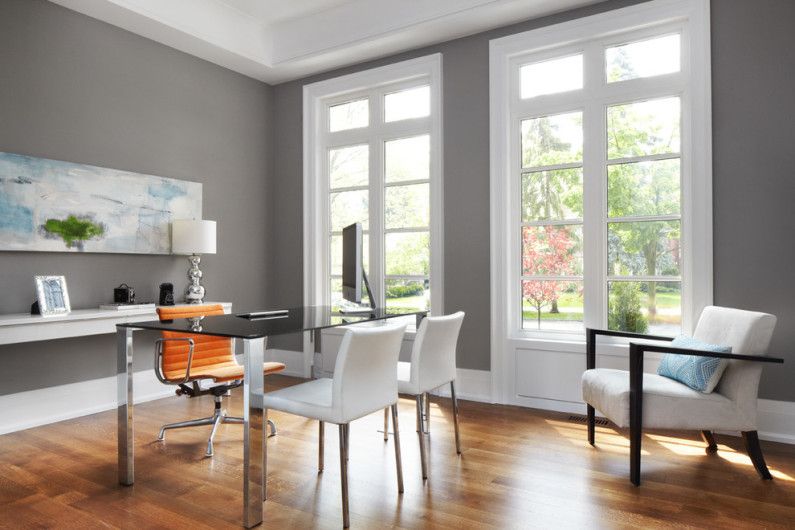 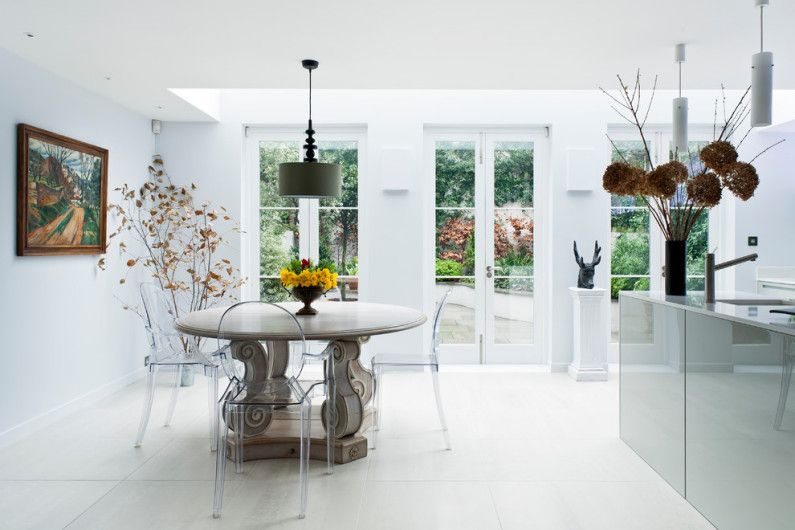 This type of window consists of three parts – a central arched opening and two narrow side openings with a flat top. The Venetian window also bears the name «Serlian» or «palladian», in honor of the Italian architects Andrea Palladio and Sebastiano Serlio, who popularized it. 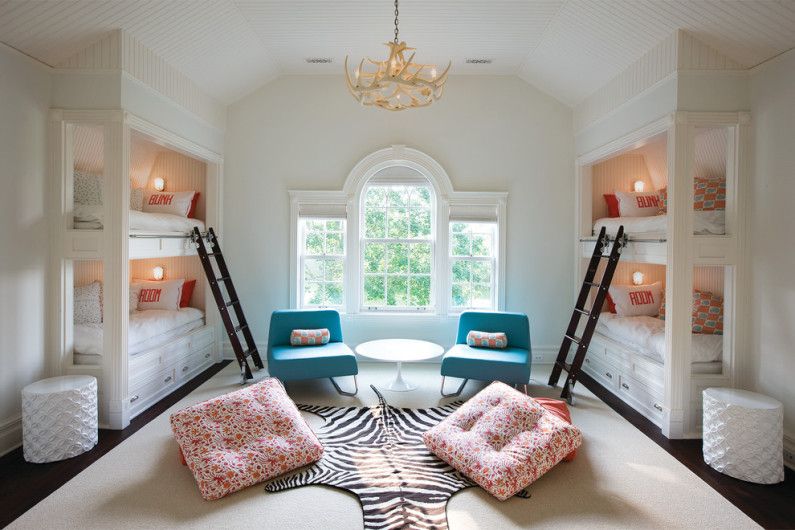 A semicircular window, divided into three gaps by racks, the so-called midships. This type of windows was especially popular in Palladian architecture, and is based on samples found in the baths of Diocletian in Rome, for which it is also called «diocletian».

For the interior, the presence of a thermal window is a great success, since this type is rarely used in construction, and designers and architects tend to romanticize semicircular, incredibly decorative windows. 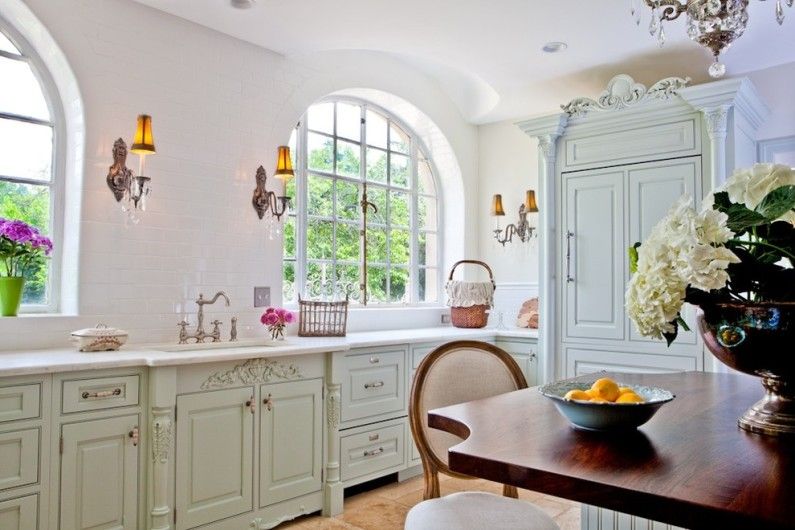 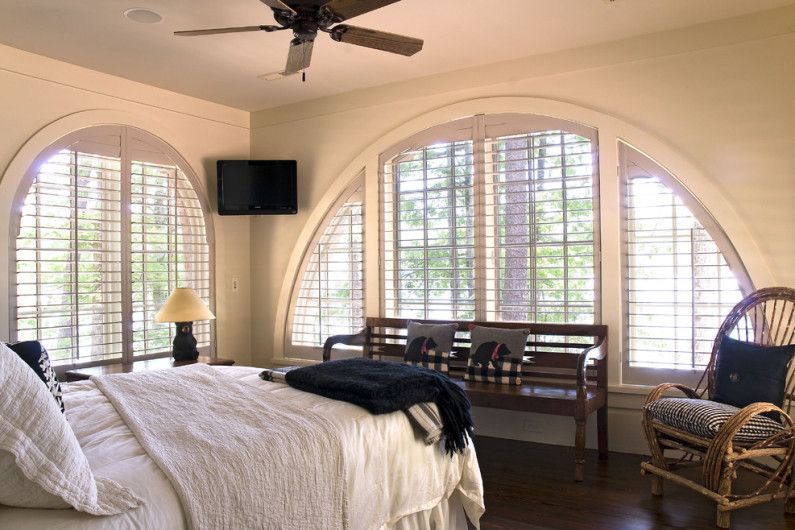 Glazed wood-bound window, lowered and raised by means of pulleys. It was especially popular in the 18th – 19th centuries. and is associated with the Georgian era in architecture. There are also English variants, for example, a Yorkshire window sliding to the side. 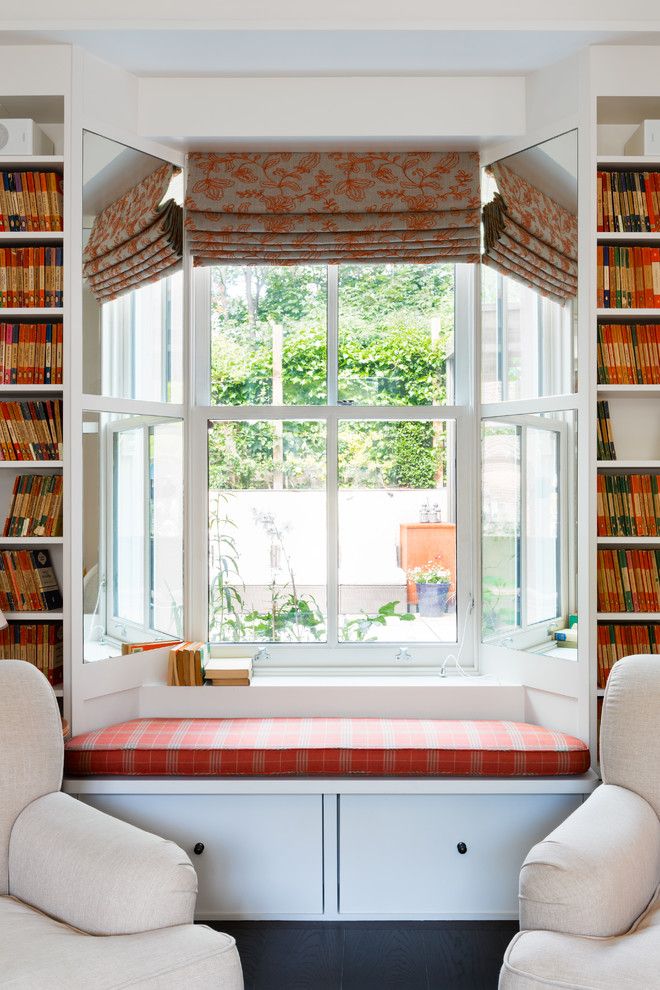 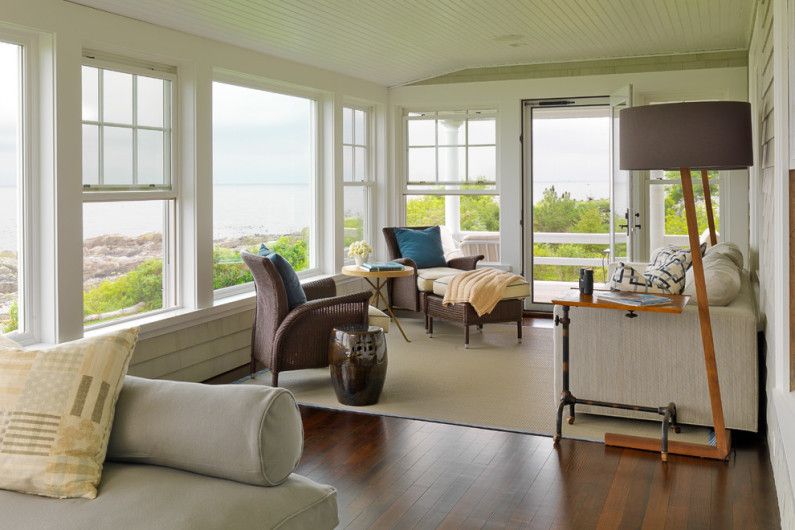 For modern interiors, pediments are an indicator of the outstanding taste of the owners, their status, as well as a completely classic, and therefore a win-win and timeless element that can transform a restrained or complement an exquisite interior..

The pediments, a distinctive feature of classical and imitated classical architecture, are the sides of a sloping roof, usually located above the portico. The pediments were often decorated with high-relief sculptures corresponding to the general theme of the building..

In the interior, pediments are often used as architectural motifs in the frame of windows and doors..

Classic pediments in the interior

In the architecture of the Renaissance, classical forms were widely used as internal and external decorative elements. And today, windows and doors, massive furniture can be decorated with columns, pilasters and pediments with steep slopes, framed by arrow-shaped stucco. 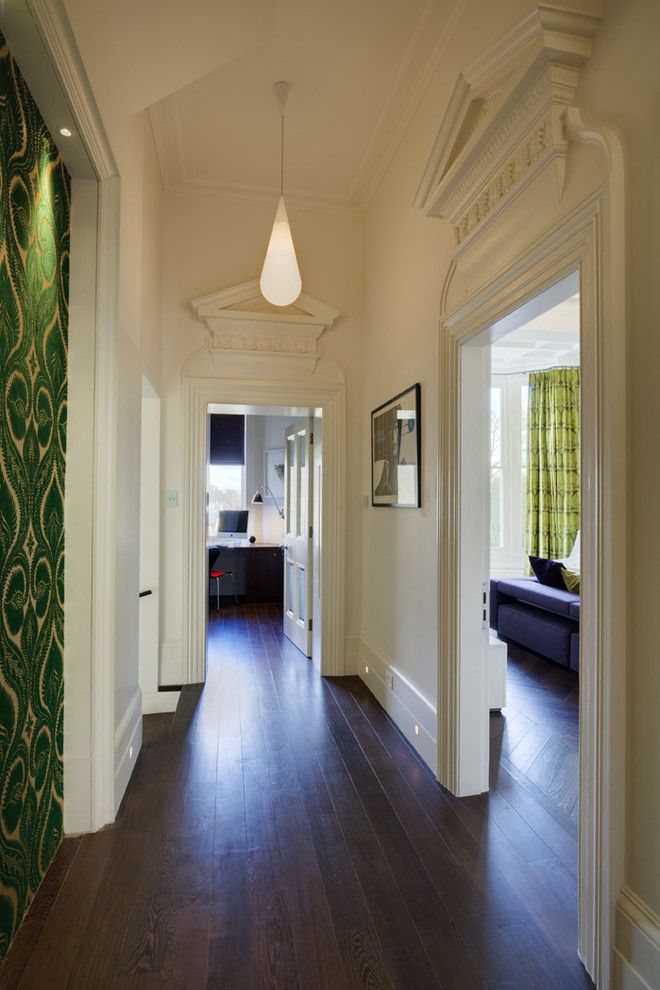 The shape of the pediments can vary from triangular to curved segmental, but a special type is also popular – a torn pediment, the contour of which is divided by an opening either at the top or at the base.

With the passage of time and changing styles of architecture, new forms of gables have been invented, for example, the ripped at the top topped with an urn. 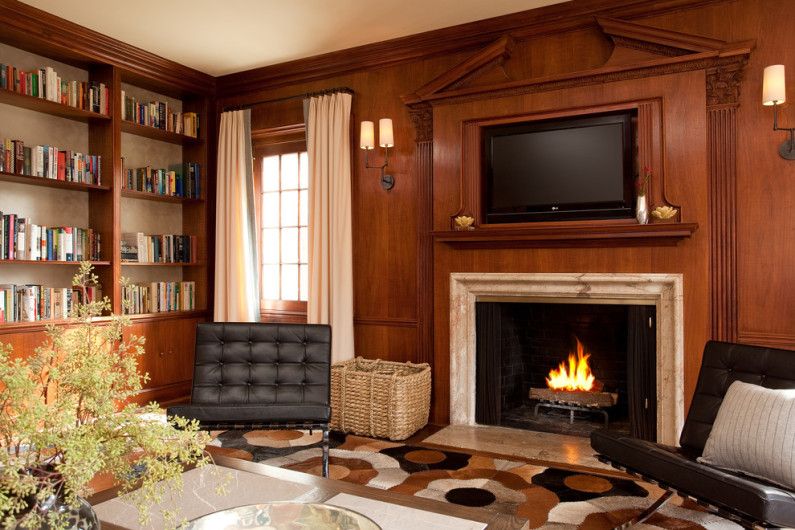 Once the decoration of the pediments was the main thing in the Dutch and Northern European knowledge, therefore they became especially skillful and expressive: with concave and convex lines of slopes, relief decor, sculptural forms.

Today, such fragments of pediments can easily compete with the usual wall decor, or completely replace it. For example, above the head of the bed, on the wall near the dining table, in the partition between the arched openings. 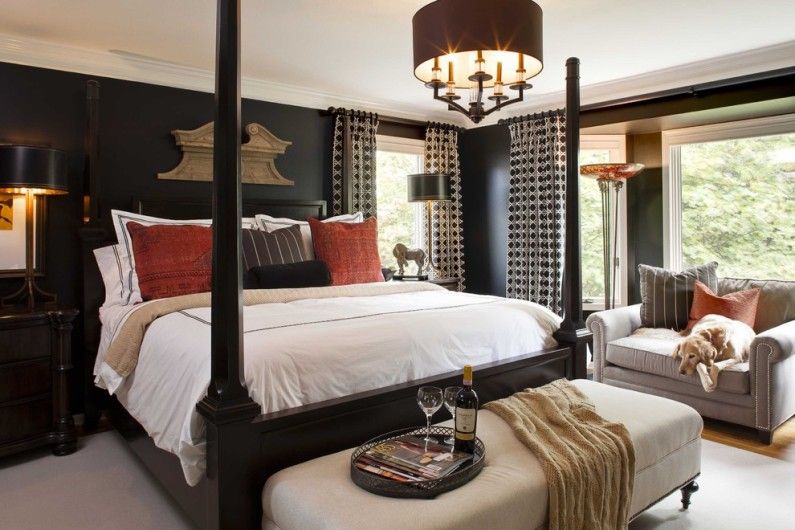 This element became key even before the Roman period, and initially the vault consisted of two parallel walls, gradually leaning towards each other and connected by a keystone at the top.

In the cathedrals of the Middle Ages, vaults were a necessary part of huge cathedrals, at the same time they reached their heyday, as if not obeying the force of gravity.

In our opinion, at present, the cylindrical and cross vaults deserve special attention, which form a completely inimitable authentic atmosphere in the premises of the house..

Cylindrical vault in the interior

The cylindrical or barrel vault is a concave vault of the same length along its entire length, it is the main and most ancient type, which appeared in the 9th century. BC Cylindrical vaults are erected on the basis of a wooden skeletal shape, which is dismantled after the stones form a full arch that supports itself. 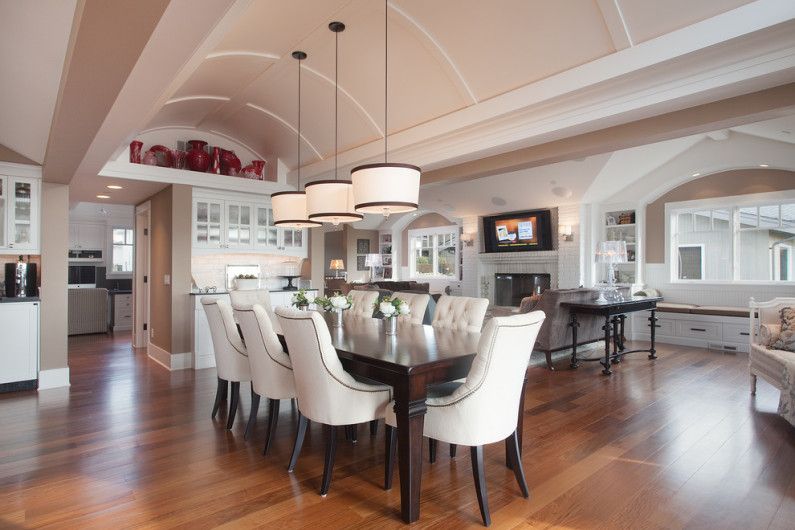 Cross Vault IN THE INTERIOR

When two cylindrical vaults intersect at right angles, they form protrusions, or ribs. In cases where these ribs lie on stone supports, a cross vault is formed, it is also called a sail.

This kind of vault really looks weightless, creating a kind of dome over the room. Agree, the space under the cross vault simply cannot be boring.

The simplest cross vault is, of course, the shape of a cross, but in some Gothic cathedrals you can see a complex system of primary, or ridge ribs, secondary (tiercerons), and tertiary (star-shaped) ribs. 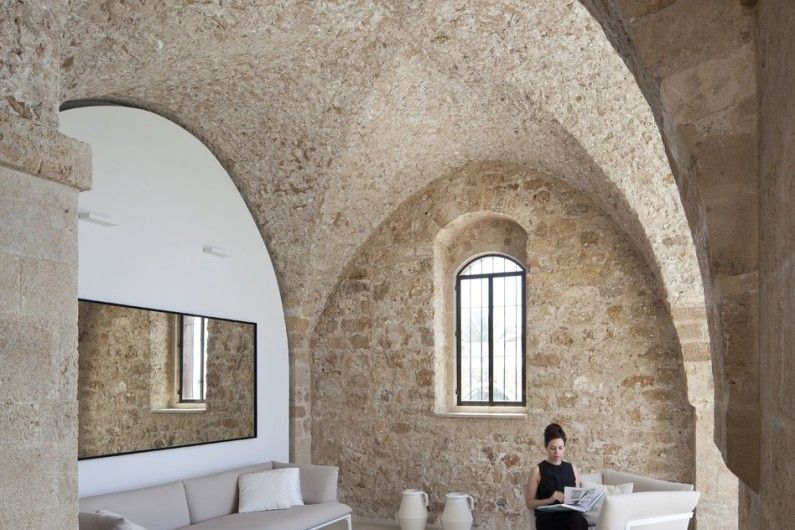 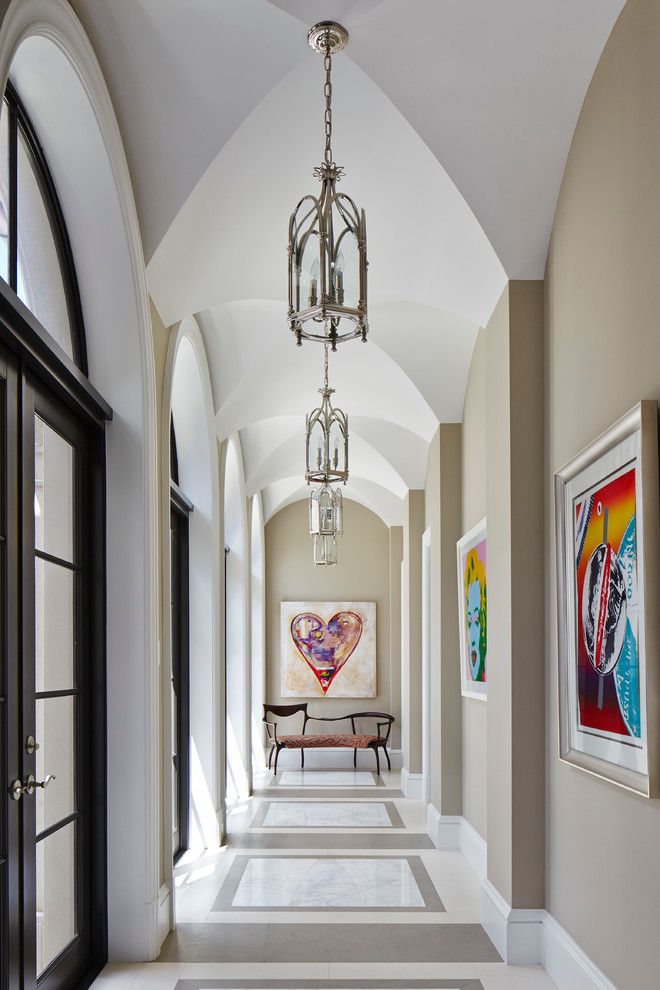 How to choose a paint color for walls

How to choose ceramic tiles

How to choose the right cornice