The classic triangle rule is based on three commonly used items – the refrigerator, sink, and stove. Should this rule always be followed? Many designers have followed it since the 40s of the 20th century in order to save space for moving around the kitchen, that is, for convenience. Basically, the rule justifies itself, but it has a number of limitations and is not always universal. We invite you to get acquainted with alternative ideas.

What zones is the kitchen divided into 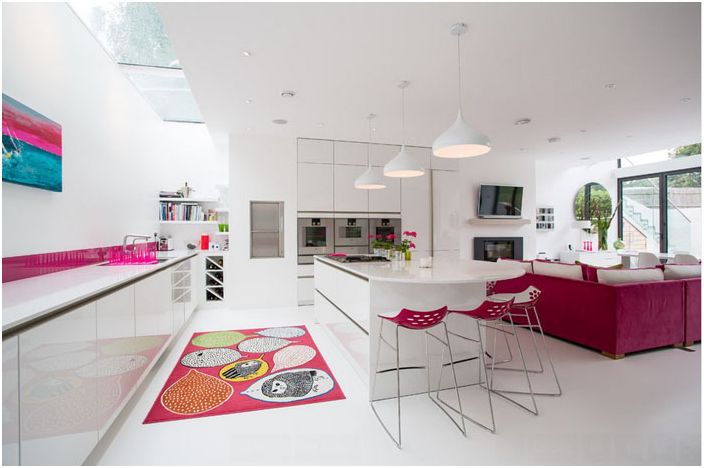 Kitchen interior by The Myers Touch

A zone will be considered a specific place in the kitchen where some work or certain tasks are performed. These are mainly areas where food is prepared, food is prepared and dishes are washed. We can add to this list an area where food is served and eaten, where the owners relax or work, where they watch TV. The kitchen may even have a designated spot for the pet. The main role of zones is to maximize space and ease of use, and do not forget about the general layout scheme.

What should be in the cooking area 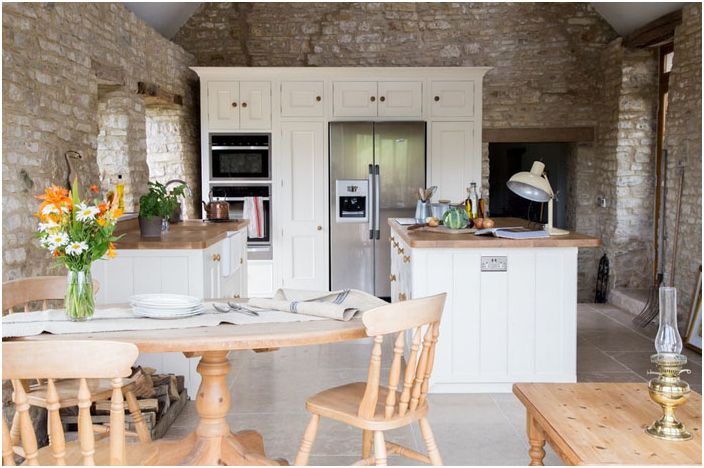 The area where we prepare and process products for their further cooking is of great importance, since the hostess spends 70% of the time here. This area should provide a work surface for daily tasks including slicing, peeling, mixing, making sandwiches, etc. By the way, the refrigerator and shelves should be located near this area for convenience, so that there is easy access to food and kitchen utensils. In the same area, there should be a trash can for cleaning and maintaining cleanliness..

What should be in the area where food is prepared 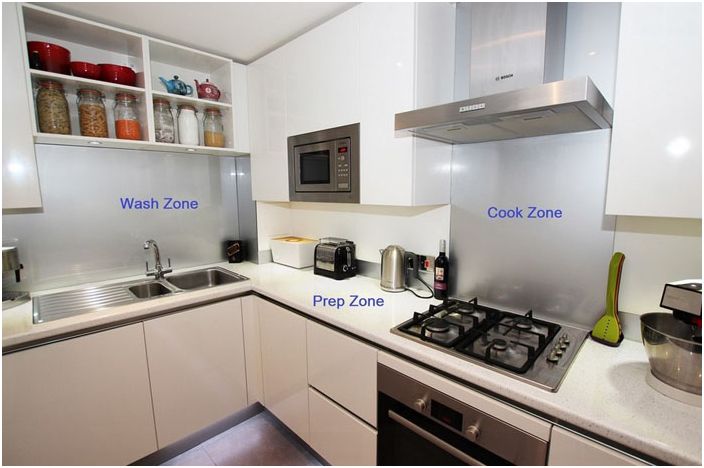 In the area where we cook food, there must be a stove and other devices for cooking, frying, baking and stewing. Ideally, it should be near the area where you are cleaning, slicing, and mixing foods. It should be convenient for you to move products from one zone to another, and the distance should be minimal, so that neither you nor anyone or anything bothers you, and you save time walking.

What to do if the work area is isolated 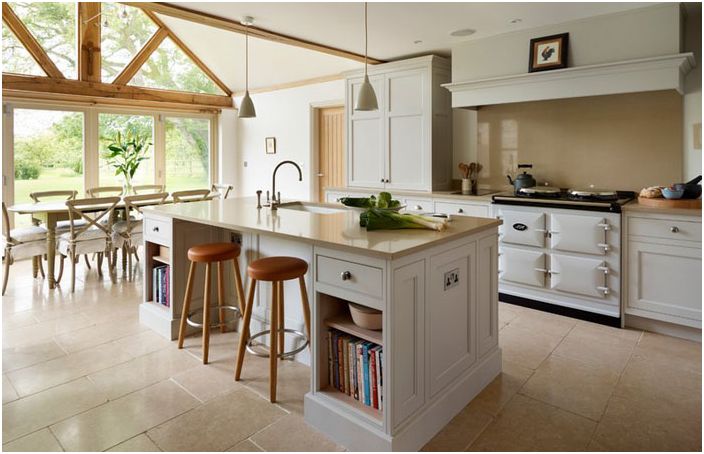 If the cooking area is opposite the area where you prepare food, whether it is located separately or in the same row with other areas, then the stove and sink should be opposite each other for greater convenience. It is not only ergonomic but also safe; when going from stove to sink, for example, to pour hot water out of a saucepan, you will not burn yourself or pour boiling water over your household if someone of them suddenly gets in the way.

What’s in the washing area 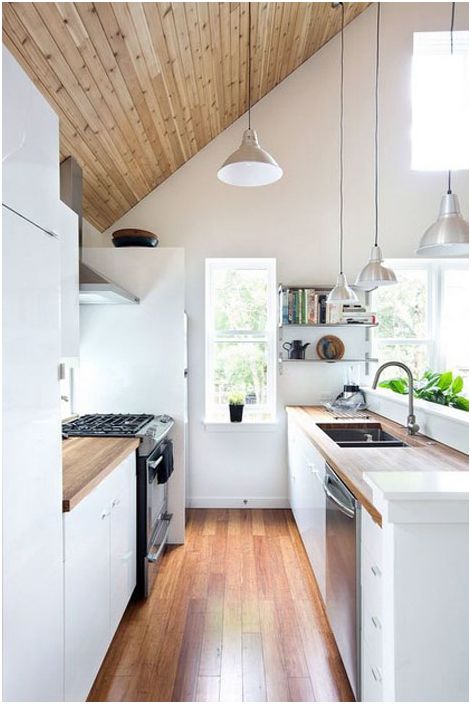 Since in this area you wash dishes, vegetables, etc., it is natural that there should be a sink, a dishwasher and, possibly, a washing machine. About 20% of the time we spend in the kitchen is spent washing dishes, so you need to think about how to make your work easier and save time for rest. Ideally, the washing area should be separate from the food pretreatment area and the area for direct preparation. There should be a trash can in the same area. For convenience, cupboards with dishes can be placed in this area. The less you move around the kitchen, the less time you will spend on tasks. Moreover, it is also more secure..

How best to plan the alternation of zones 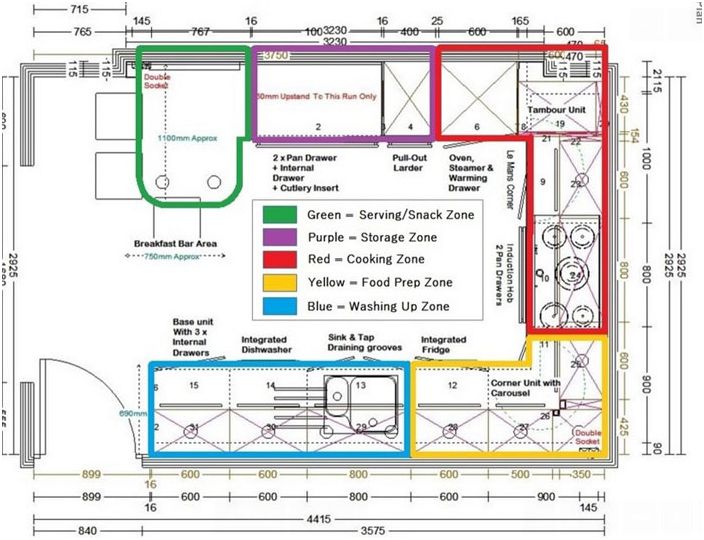 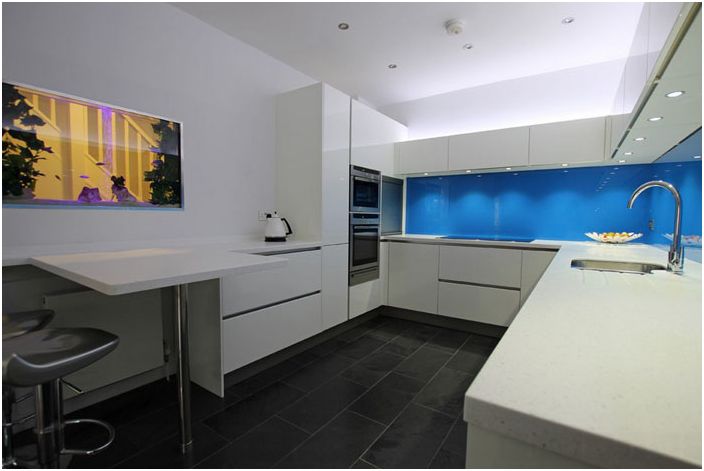 This is what your kitchen might look like as a result. This kitchen was designed for a working married couple. Since this house already has a separate room set aside for the dining room, the couple wished that the designer planned a quick bite area in the kitchen where they could have breakfast and where the children could do their homework..
It is logical that the refrigerator is located in the working area, but many people prefer to put it closer to the exit in order to look into it more often if they get hungry. 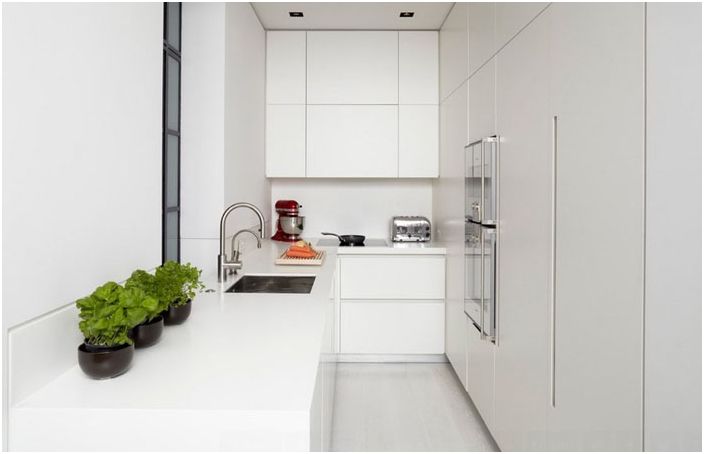 An overlap zone appears if the space in the kitchen is limited, but this is not a disadvantage. For example, the zone for preparing products for cooking and the cooking zone itself overlap due to the fact that the first is located on both sides of the cooking zone, that is, the stove. This arrangement allows you to separate the area where you prepare food from the area where you can put the hot pot by removing it from the stove..
If space allows, then it is better that the zones have their place and do not overlap, especially for the washing zone and the preparatory zone. 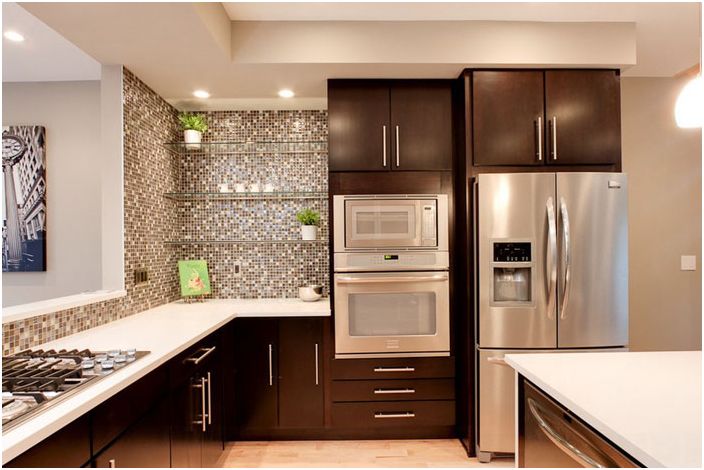 Imagine that you decide to cook something, and the refrigerator, an integral part of the preparatory zone, is in the washing zone. If someone washes the dishes at this time, then you will definitely interfere with each other. The same will happen if someone else loads the dishwasher with dirty dishes at this time – he will just be under your feet.
With such overlapping zones, you can easily confuse dirty dishes with those intended for preparing food. If overlapping areas cannot be avoided in a kitchen with limited space, the sink should be separated from the area where you prepare food for further thermal processing..

Severity of the rules 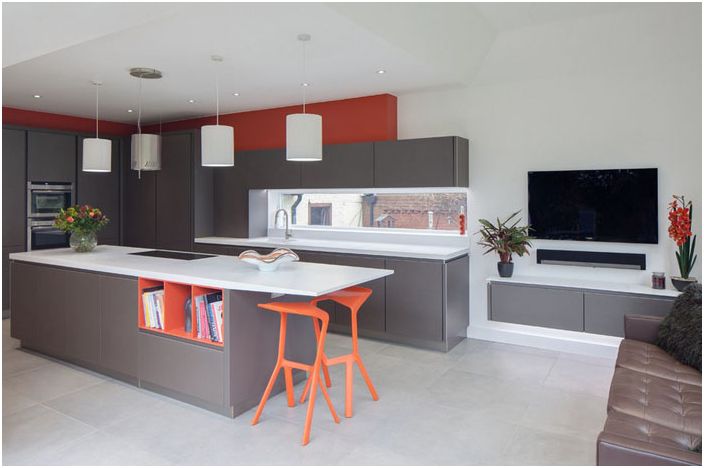 You don’t have to strictly follow the rules, just stick to them whenever possible. For example, the refrigerator can be separated from the preparation area by the area where you prepare meals. These zones are functionally very close, so this arrangement will not greatly affect the work..
Flexibility in decision making
Zoning in the kitchen, first of all, depends on the knowledge and ideas that the designer owns. He will always follow the rule of ergonomics and comfort without ignoring aesthetic requirements. Since the 40s of the last century, kitchen appliances and approaches to kitchen design have changed dramatically, now everything is based on individuality, and not on general rules.
Having organized the kitchen space correctly, you can start decorating it. We offer 20 stunning interior design options in such a traditional but unusual strip.