Interest in the topic of this article can be caused by various reasons. But eighty-five percent is indifference to the appearance of your home. After all, its facade is not only «face» buildings but also «face» its owner. This relationship drives all interested readers to study this topic. Don’t blame the remaining fifteen percent of homeowners for being indifferent to their «face». There are many reasons here too, including financial, because the design of the facade of a country house is quite an expensive pleasure..

But this article will help both groups of homeowners, because it contains information not only about the design of the facade, which requires significant investments, but also about its options, which are quite accessible to everyone who wants to. Of course, you can just order a design project. But the design, made according to your own project, will be your pride, because it is unique. And the uniqueness of the facade of the house has always been an end in itself in such projects. So, let’s begin.

Before proceeding with the design of the facade of the house, we decide in what style we want to see it. This is the basis for everything that follows. Do not forget about the opinions of other family members..

The design of the facade of a country house is most often done in the following styles:

Why are modern styles missing in this section of the article? First, modern architectural design styles are more in tune with urban «landscape». And we are talking about the design of the facade of a country house, that is, a house where you should feel peace and unity with nature, with the historical heritage of your ancestors. It is unlikely that after spending all day in the office glass box, you will get it when you return to the high-tech house. And there, who knows. Maybe for you urban architecture with its minimalism, hi-tech is a native element. To choose for you.

We cover the walls of the facade, options

Having decided on the style, it’s time to think and get acquainted with the range of materials used for cladding the walls of the facade of the house, choose the one you like the most and suitable for the style of the house. Here are some of the most popular.

A natural stone. It is the oldest natural facing material. Quite costly, but very reliable, that is, it is worth it (this is how our ancestors estimated the quality of the material). The facade, faced with stone, gives the house an original and respectable look, and the owner – a high social status. Many shades and various textures make the stone «his» in any design solution. In addition, by facing the facade with natural stone, you will give its walls additional strength..

Facing with natural stone creates a significant load on the foundation. When building a house, this should be taken into account..

Facade tiles made of natural and artificial stone. It is an excellent modern facing material. It is made of limestone, shell rock, sandstone and wild stone (dolomite). Accordingly, each type of tile has its own color and texture, which allows you to implement any design idea. The main colors of facade tiles are brown, gray, yellow (from dark to light colors). The tests carried out have shown that the facade tiles are frost-resistant for at least fifty cycles. Resistant to the external environment, it does not lose color, does not deform. This property will allow your home to have a pristine appearance for many years..

Artificial stone will help the facade of your home acquire the same look as with natural stone, but much cheaper. At the same time, the work on facing (laying the stone, processing it) is much easier. It should also be noted that artificial stone has a wider range of shades, which makes it easier to find a design solution for facing the facade of a house..

Face brick. Initially, it was inferior to natural stone in the range of colors and textures, but modern technologies have made it possible to correct this. The color of modern bricks ranges from light yellow to dark red. This material is cheaper, the work on its laying is less laborious than stone, therefore it looks more attractive. Due to the variety of brick shades, various combinations of them can be used in the facade decoration. A house tiled in this manner will look very original, emphasizing your creative nature..

When choosing a brick, you should pay attention to its characteristics. He must:

Decorative facade plaster. Provides a very decent look to the facade of your house. The work on facing with facade plaster is easier than the previous ones, and the plaster itself is a fairly reliable material if the technology for preparing the solution and applying it to the wall surface is followed. For the reliability of the coating, a mesh reinforcing the plaster is used. It is important that an antiseptic is added to the solution, thanks to which mold does not appear on the facade of your house. Facade plaster has a distinctive feature from all other types of cladding – the ability to paint it in any color you choose. This made her popular at all times and in all countries..

Siding. This material has appeared recently. Due to the relatively low cost, ease of installation, siding, one might say, burst into the building materials market. It has a wide range of colors, which has allowed it to gain great popularity in the design of building surfaces. But here it must be borne in mind that siding loses color over time under the influence of sunlight. Therefore, if you decide to revet the facade with siding, you should give preference to pastel colors.. 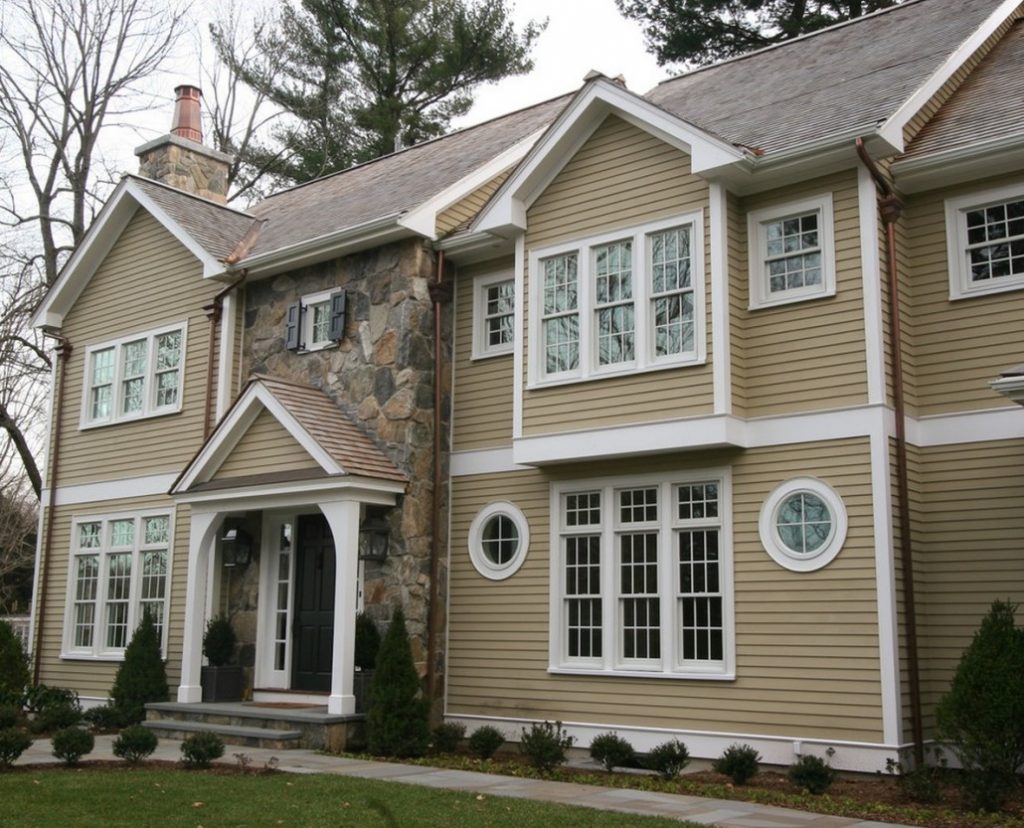 The most commonly used siding is vinyl, basement and wood. Vinyl is not recommended by experts to use in regions with an air temperature below twenty degrees, as it loses its original properties.

The best of these materials is wood siding. Popular with admirers of country style design, especially country style. The naturalness and naturalness of the facing of the facade of a country house, like nothing else, reminds a person that he is a part of nature, and that a connection with it gives him a lot. Wood is an excellent thermal insulation material. Having treated it with an antiseptic, you can not worry about its condition for many years. Provides additional strength to walls. 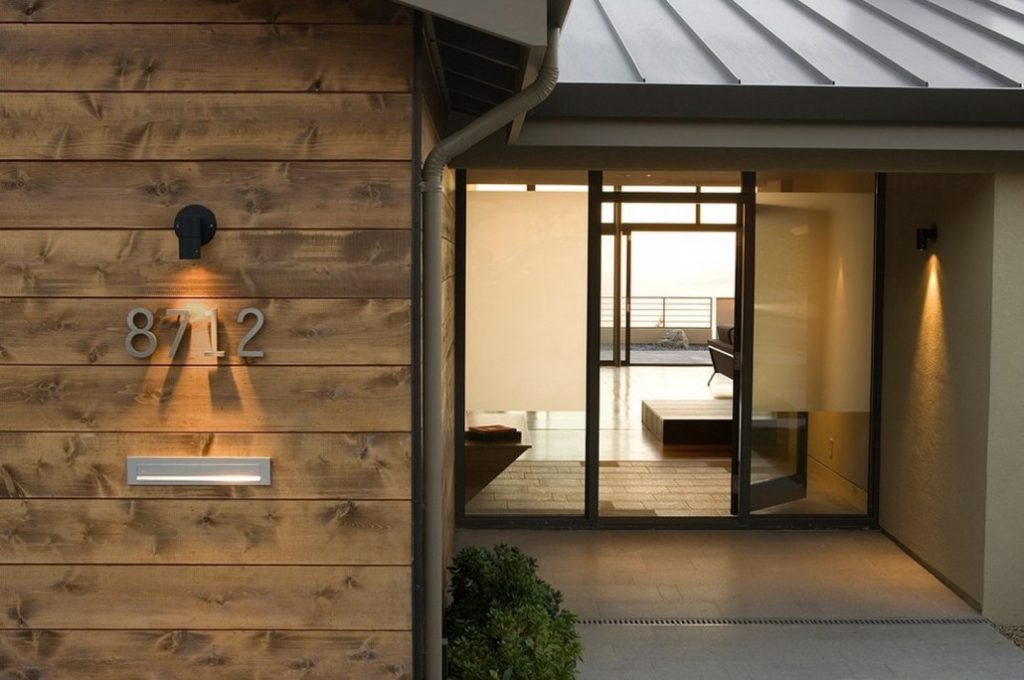 The cheapest material is considered «lining» – ordinary grooved board. But true tree lovers prefer a block house – the same «lining», but in the form of a segment of a log or bar. Sheathed with a block house, the facade will create the appearance of a house built from cylindrical or profiled logs. The main disadvantage is the high price and fire hazard. True, the last drawback is eliminated by impregnation with a special composition.

There are usually two options for siding cladding: horizontal and vertical. The names themselves say what they are. 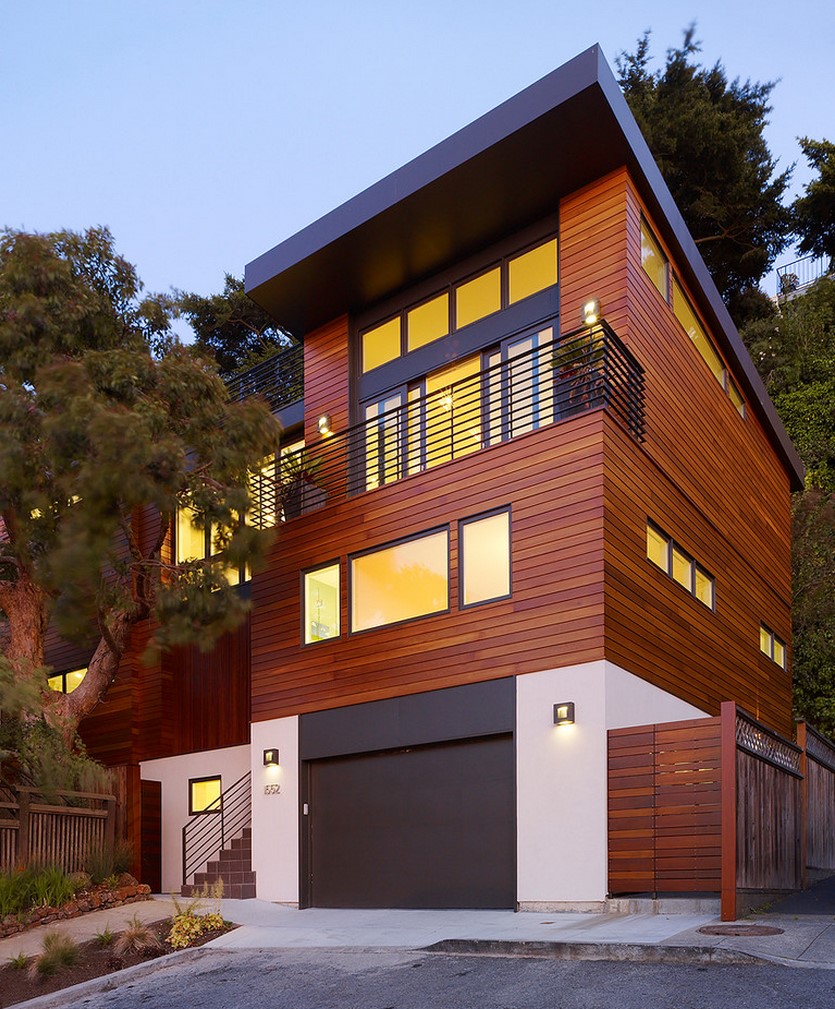 Need to know, that siding does not provide the added strength of the walls of the house like other materials. Also, it does not allow to control the state of the wall lined with it, that is, the appearance of signs of its deformation remains unnoticed. Therefore, there is no need to explain what this situation threatens.. 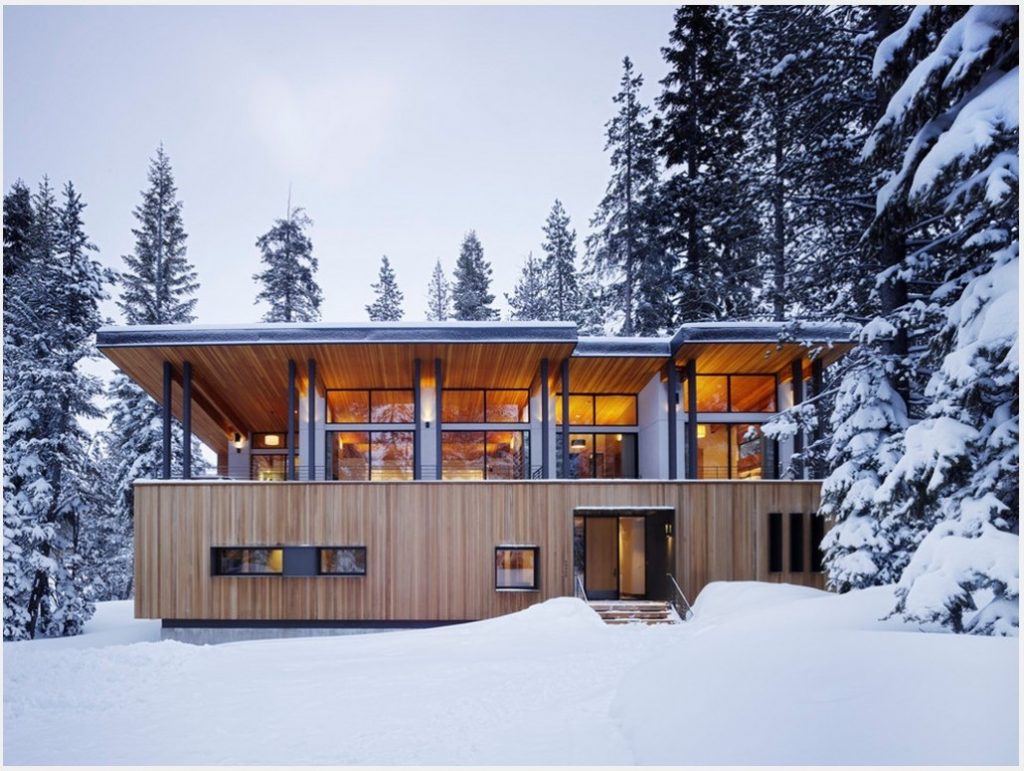 Above, options for a homogeneous surface cladding were considered, that is, made with one material. But the creative thought of designers does not stand still, and today the combined cladding of building facades, consisting of at least two materials, is gaining popularity.

Getting acquainted with the photos given in this article above, you noticed that it is not always possible to achieve what you want with one facade cladding. And you wish, of course, the beauty of the house, so that everyone passing by admires it and envies your ability to create this beauty. For this, there are various decorative elements..

So, let’s start decorating the facade of the house. Let’s get acquainted with some of the most common decorative elements:

Eaves. Almost no house, and even more so, its facade, is complete without cornices. This is the most common decor element..

Cornices are made of different materials, but in recent years expanded polystyrene cornices (made of foam) have become widespread. Thanks to this material, you can easily correct the appearance of the facade..

Rust. This element of decoration of the facade of the building has been known since ancient Greece. But today it has not lost its popularity. Rust is an artistically executed plaster of certain wall surfaces (framing windows, doors, corners, etc.). Most often they look like brick or masonry with a rough, chipped surface in the form of rectangular prisms or pyramids..

Bas-reliefs. The most beautiful and effective element of the building facade decoration. But we must remember that bas-reliefs will be a decoration if the style of the architecture of the house corresponds to this. As a rule, for the classics it is a relief image of animals or people, for the Empire style – the coat of arms, musical instruments and banners, for the Art Nouveau style – plants.

Small capitals Is the artistically designed upper part of the column that extends beyond its limits. Provides a beautiful and smooth transition from the surface of the column to the structure it supports.

Decorating windows and doors. It can be made both of natural stone and modern materials, for example, polyurethane. In this case, one should adhere to the style and color of the facade. Graceful semi-columns will perfectly highlight the front door. The embossed decor will emphasize the exclusivity of the framing of windows and doors. Since this work is the final part of the design of the facade of the house, it should be given special attention. After all, the last «smear» you can spoil the whole picture of the facade of your house.

Such a wonderful element of window decoration as shutters has not been forgotten yet. Unfortunately, there is now a significant simplification in this matter. Shutters play more a functional role (guard) than decoration. They are no longer distinguished by a special sophistication and art, which the craftsmen-owners used to try to stand out for. Although traces of the past can be seen here and there.

Facade lighting. Can serve as an element of facade decoration. With the help of properly organized facade lighting, your house will fabulously transform in the evening, as design elements invisible during the day and its dignity will be emphasized. Of course, for this you will have to resort to the services of professional designers. But, if you have golden hands, you can do this work yourself, and this article will help you with this..

There are several types of facade lighting. Let’s consider some of them:

Properly organized lighting of the facade of the house will always delight you. But do not forget that you have to pay for everything, including electricity. Therefore, use energy saving lamps.

Psychologists are unanimous about the impact of the environment on human health. If a person observes beauty and harmony around him, is in it, then his mood will be excellent, and in his soul – comfort and peace. A beautifully executed design of the facade of your house should serve this. We hope this article helped you in this matter..